Remarks:
Taxing for Take Off

Me and GF has a staycation at GF's Sister's home in Batangas. From our home, we went to SM City Calamba to have lunch, mall tour and to visit Rizal Shrine in Calamba.

We rode a bus to SM City Calamba. Sadly, traffic routing in that area forced our bus driver to unload us at the back of the mall thus we made along walk. We then entrusted our luggage and stuff at the package counter so that we will not drag it along our tour. We then met her sister and her sister's kids at the food court. After a short malling, we went to Adobo Connection.

Her sister recommended this place for it was the latest food joint of the mall. Truly indeed, we are not the only one who have the same idea. The place is an SRO (standing room only). We waited a bit long. A group of students fortunately was done and gave us a long table good for us five before our meals came.

These meals are good for a solo eater but we managed to share it so that we can have a taste of all variants.

Outro: Thank you Ate Don for this treat.

Pros : yummy
Cons : SRO is a good sign that they serve good meals but please wait to be seated.

Me and my sister was invited to attend a Christmas party for bloggers organized by our favorite restaurant.

We went to Greenbelt 1 branch and had our dinner there. After the said dinner, we then proceeded to Redbox in Greenbelt 3 for our "bloggers got talent" videoke night.

It was agreed that all attendees will sing and the organizers will judge who will win the first ever "Max's Bloggers Got Talent" and bring home a trophy and a cash prize.

While we are taking rounds in the microphone, a redbox crew took our order of drinks. I ordered San Miguel's Cerveza Negra.

When our orders of drinks was served, one of our friends noticed a different kind of bottle. "how does it taste like?" she asked and my sister answered "its a bit sweet compared to pale pilsien."

On with the songs and happinings and the first round of fingerfood came in. Our organizers ordered it for us.

We sang, we laughed, we mingled until 11pm. I can say that this event was one of my favorite experience for 2012 for many simple reasons:

First, its our first Christmas party from this year and from this organizers, we did not attended last year's party for was was not yet part of their bloggers pool.

Second, its really the best drinking experience that’s above the ordinary. It was my first time to go to a videoke joint. All the food, the fun, the laughter and most specially, the friendship we glued us together for one fellowship night.

Our finger food was great tasting, not so oily, all balanced. Me and my sister only got the best pairing for we paired these with San Miguel Cerveza Negra.


All of these food are so great tasting and all flavors are well balanced - spicy, salty, umami. But when you paired it with San Miguel Cerveza Negra it complements that flavors. Since San Miguel Cerveza Negra is a bit sweet, it completes all flavors that's why I can say "its a fiesta in our mouth and a drinking experience that’s above the ordinary".

Don't just take my words, do it so that you can experience it. San Miguel Lifestyle brews really puts "merry" into "Merry Christmas". 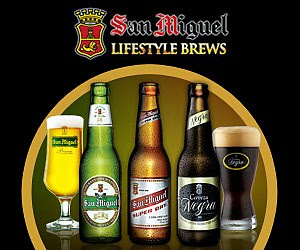 My GF and I went to her sister's home in Sto. Tomas, Batangas to visit her and her kids plus a quick tour in Laguna-Batangas Area. As part of the Itinerary we went to Isdaan Resto-Fun Park in Calauan, Laguna for lunch after our short stops in San Pablo and Nagcarlan towns (also in Laguna)

For the first part, I'll share to you what we ordered. As I mentioned, the place is like having four restos in one place thus the menu is so big and its hard to choose for all of them are a bit pricey but deliciously good.

GF and her sister placed the order as I roam around with her sister's two kids and cousin for a picture taking. Here's what they had ordered and as early as now, I'll tell you that all are so good.

Every fiesta have rice so since we are a total of 6 pax we had two "Bagong Saing sa Kaldero". Each Kaldero is good for 2-3 pax. See that spoon? It's not a normal serving spoon, its just a simple table spoon we used as a serving spoon. Thats how small the pot is.

Pros: Nothing beats a newly cooked rice strait for the pot. Much cheaper than ordering individually cupped rice.
Cons : Each pot have burned  rice and they are a big waste and it affects the taste. We had about more than a cup of burned rice.

What I do love about their "sisters" tag team, they ordered a dish per food group:

For the pork we had two: "Inihaw na Spareribs" and "Lechon Kawali"


Then as for our soup and chicken we had "Tinolang Manok". GF's Sister said that while we are all away -for our picture taking - they served the Tinola incased in a bamboo tube - Kapangpangans call it "binulo" - then poured in this bowl.

Lastly to quench our thirst -from our travel, from the sunny heat and as we say "panulak", we had three pitchers of Ice Tea.

Over all Pros: They are all good and Tasty
Over all Cons: for a big guy like me, their serving as somehow not big enough for me. If you share it, you'll all get a bit.

Ambiance = 6/5 you'l be transported to another place like Bali or Thailand.
Food Taste = 5/5 except for the tinola which is 4/5.
Budget = 3/5 its abit high priced compared to its serving.
Service = 6/5 they are so honest, courteous and friendly.

To get there:
*by Bus: Ride a bus en route to Sta. Cruz, Laguna and they will drop you off on site.